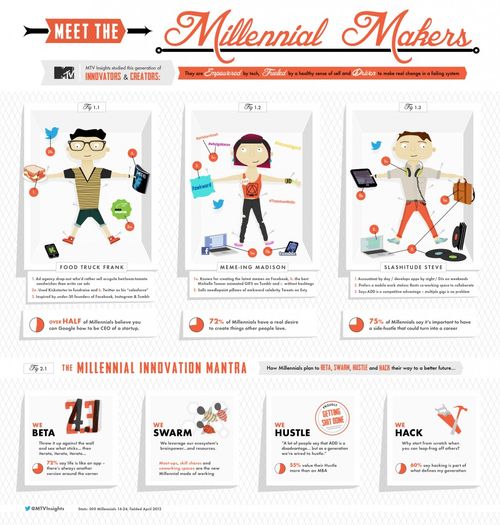 In a recent MTV study entitled “Generation Innovation,” we set off to look at the resiliency of a Millennial generation that is pushing back against a system in need of repair… whether the economy, the environment, the education system and more.

What we found was counter to the often-charged caricature of today’s youth as “entitled” and “coddled.” Instead, we found a vibrant and strong fixer/maker/builder culture where nearly 3 in 4 of Millennials believe “our generation is starting a movement to change old, outdated systems.”

Put more broadly, if the American Dream isn’t working as promised, Millennials will take it upon themselves to iterate the next “version” of America.The heady mix of forces driving this generation is only partly due to their sense of needing to fix something broken.

The other even more potent side of the coin is the primacy they place on their own power of creativity. When asked “what word best defines the DNA of your generation?” the number one response was “Creative” and number two “Self-expressive.” A full 70% of Millennials in the study agreed “Creativity will save us!”

One of the first places we checked in on our journey was Detroit. We were fascinated by the “canary in the coal mine” dynamics at work with a younger generation busy appropriating, fixing and remixing the American Dream – whether transforming abandoned factories into hack spaces, disused cycle tracks into playgrounds, distressed storefronts into galleries for emerging artists or untangling arcane local government departments.

Millennials have the motivation and DNA to run wild with innovation, but they also have access to the tools, technologies and platforms to make a real difference. In fact, 92% of Millennials feel “empowered” by technology (versus just 11% feeling overwhelmed by it).

What the generation is busy fixing and making is interesting to watch, for sure. But perhaps most fascinating is HOW Millennials are going about innovation and what we can all learn from it about what form the next version of the American Dream may take.

Read the entire report over on the MTV Insight Research blog: