« Glee's Jane Lynch: "If life gives you lemons, grab it by the horns and drive." | Main | Infographic: What Happens When You Report Abuse on Facebook? » 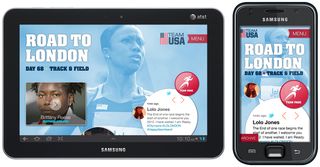 Just in time for the 2012 London Olympics, the US Olympic Team has launched a new mobile app for fans and supporters of Team USA.

The app is available now in both the iTunes and Google Play App Stores.

2012 Team USA Road to London, a free mobile and tablet app, tracks athletes' quest to earn a spot on the 2012 London Olympics and Paralympic Teams.

Fans can enjoy news, video, photos and a chance to interact directly with the athletes through a "Cheer" function, using their Facebook and Twitter accounts.

Key features of the application include:

• Daily updates of who is making the team