Trend Watch: Ryan Seacrest on the Future of Television and Entertainment 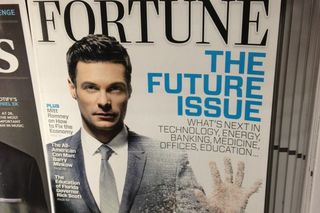 In an interview this month with Fortune Magazine Ryan Seacrest talks about what he considers the exciting future of entertainment.

”We’re seeing platform, technology, and content all converging, and it’s happening quickly,” he says. “It’s exciting to me.

There’s an appetite for more original content than ever, and I have a company that creates content, whether it’s distributed in short form, reality form, live form, or game form.”

However, what stories might television viewers expect to see from the Emmy-award winning Jaime Oliver and record-breaking Kardashian’s producer?

However, what stories might television viewers expect to see from the Emmy-award winning Jaime Oliver 'Food Revolution' and record-breaking Kardashian’s producer?

Ryan reveals he desires: “to continue to produce shows that directly effect change. We’ve gone too long without addressing issues like child obesity, so to be able to tell those stories and help people through television is a powerful thing.”

You can read the entire piece in the January 2012 issue of Fortune Magazine.