Lady Gaga Teams Up with Harvard, MacArthur and the California Endowment to Launch the 'Born This Way Foundation' - Derek E. Baird

Lady Gaga Teams Up with Harvard, MacArthur and the California Endowment to Launch the 'Born This Way Foundation' 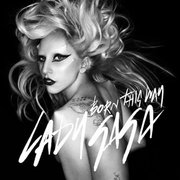 To date, Lady Gaga has harnessed the power of the Internet to attract more than 44 million fans on Facebook and 15 million followers on Twitter.

The foundation, named after her Grammy-winning album and single of the same name, was launched by Lady Gaga and her mother, Cynthia Germanotta.

"My mother and I have initiated a passion project. Together we hope to establish a standard of Bravery and Kindness, as well as a community worldwide that protects and nurtures others in the face of bullying and abandonment."

It follows on the singer's interests in supporting youth issue. Last year she partnered with Virgin Mobile to raise awareness of homeless youth and after the suicide of bullying victim Jeremy Rodemyer she elevated the issue of bullying in schools into the national spotlight and even raised the issue with President Obama. 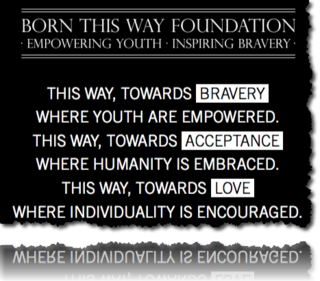 The Born This Way Foundation will be work closely with the John D. & Catherine T. MacArthur Foundation and The California Endowment, both focusing on youth empowerment.

The Foundation will also work with the Berkman Center for Internet & Society at Harvard University, which focuses on the power of the Internet as a means to promote change.