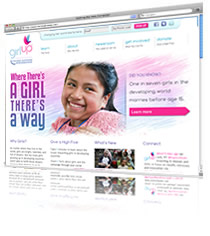 The United Nations Foundation is launching its newest campaign – Girl Up – which encourages American girls to channel their energy and compassion to raise awareness and funds for their counterparts in the developing world.

Girl Up will raise awareness about the 600 million adolescent girls living in developing countries and encourages American girls to give back.

Funds raised through Girl Up will support proven United Nations programs that help the hardest-to-reach girls in such countries as Malawi, Ethiopia, Guatemala and Liberia.

Campaign supporters are encouraged to give a “High Five” to girls in developing countries by taking five minutes to learn about the issues facing girls or by donating $5 or more to provide girls with such basic needs as access to school supplies, clean water, life-saving health services, safety from violence and more.