« Infographic: Chinese is the New Dominant Language of the Internet | Main | How To Influence On Twitter: Research Results from HP Labs Algorithm Give Guidance »

In a post-election nationwide survey of adults, the Pew Research Center’s Internet & American Life Project found that 82% of adults have cell phones.

Of those cell owners, 71% use their phone for texting and 39% use the phone for accessing the internet. With that as context, the Pew Internet survey found that:

If a respondent said she or he had done any of those activities in the last campaign season, we counted that person in this 26% cohort. Throughout this report we call this group “mobile political users” or the “mobile political population.”

Some 71% of cell owners say they voted in the 2010 election, compared with 64% of the full adult population in this survey who say they voted. (Note: The overall reported turnout was about 40% in the election. It is common for post-election surveys to hear from a greater number of people who say they voted than was actually the case.) 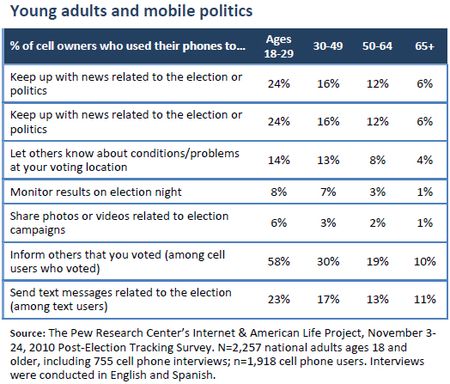 There was no partisan tilt in the makeup of the mobile political user population. They split their votes equally between Democratic and Republican congressional candidates – 44% to each.

About 2% said they voted for other candidates and 10% didn’t answer the question or said they didn’t know. Generally, there were few partisan or ideological differences in way this group used their cell phones for politics.

In most cases, those ages 18-29 were more likely than those in older cohorts to use their cell phones for getting and sharing political information.