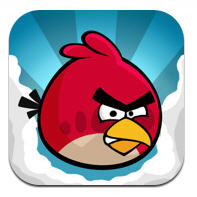 For those of you living in a cave, Angry Birds is the addictive game that has become the top iPhone app in the world.

The game has over 7 million downloads and is poised to be the next big entertainment franchise. Think Sponge Bob. Mark my words, Angry Birds is going to be huge.