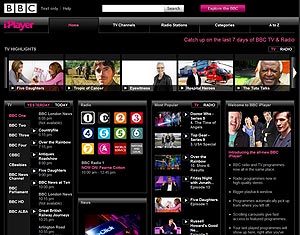 While monthly video viewing in the U.S. may be showing signs of leveling off, the British market is in serious growth mode. As in the U.S. Google's YouTube has the lion's share of that market, with slightly less than half of all videos served. While the market fragments quickly from there, the TV networks are growing rapidly.

The BBC more than doubled its videos viewed last year to come in second place. Each visitor to the broadcaster's site consumes 15.7 videos a month. Before many U.S. networks and Hulu started pouring prime time onto the Web, the BBC was developing its robust iPlayer portal and player.

While the BBC’s video viewing audience tends to be male and spread between the ages of 25 and 54, Channel 4 skews heavily toward the 15-24 year old age group. The site was visited evenly by males and females but women watched five more videos then male viewers on the site during the month.

Facebook is the big up-and-comer in U.K. video, however and clearly the one to watch. The social network saw the number of videos viewed rise 205%, to 42.6 million in February.

The importance of Facebook to all online businesses, including video, was underscored last week by no less a video maven than Mark Cuban, co-founder of HDNet.

In a post at his blog, Cuban mused that Facebook has become the new Internet, the place we now go to fill time in much the same way we channel surf TV. With its increasing knowledge of users and alternative means of discovering content via social sharing, he sees the network as a challenge to two of the biggest stakeholders in the digital universe.