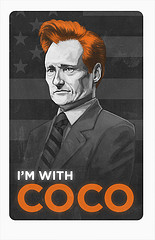 I just finished watching Oprah Winfrey's interview with Jay Leno as well as  her after the show discussion with her audience in Chicago.

As I watched the episode, I found myself taking notes (dork alert!) and thought I'd share a couple few thoughts on the role social media & youth played in the whole The Tonight Show debacle.

One thing is clear: If NBC wants to rehabilitate Jay Leno's burnished image, they are going to have to jump into the social media trenches and tell their own story--before someone else does. They also need to face the cold reality that they don't have absolute control over the message anymore.

I may be wrong, I may be right. What do you think?

Either way, given the situation in Haiti, this seems like a really silly discussion. This is a point that Conan made every night during his final week: Forget about us (Jay & Conan) and donate to something that really matters--Haiti Relief.

I think that's something that we can all agree on. If you haven't already, here's how you can help the people of Haiti.

And oh, apologies to Pat Benatar.....