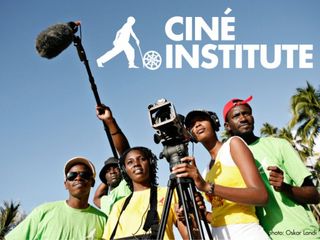 The Ciné Institute is Haiti's only film school and home of an innovative program that trains Haitian youth in all aspects of filmmaking (creative, technical, business skills) necessary to grow local digital media industries in Haiti that can provide jobs and spur economic growth needed to improve their lives and the lives of others in their community.

Despite having their school reduced to rubble and losing most of their film equipment, these young filmmakers have been tirelessly been documenting the aftermath of the quake that has devastated Haiti.

Luckily they were able to salvage some of their equipment and since then have been sharing the "we story" of their community by uploading on-the-ground reports via Twitter, their website and their Vimeo page.

These filmmakers have put together some eyewitness reports, filming, editing and uploading for as long as they have enough fuel to run the generator, showing both the physical destruction of the buildings, as well as human suffering that is now all too commonplace in post quake Haiti.

“I was afraid, I was afraid. After finishing our short movie, I went to help my friend Bougon because he was shooting in our neighborhood when this terrible catastrophe happened, which has put my city, the city of Jacmel, in mourning.

Despite my fears, I went to help friends, people I didn’t even know. We felt powerless, we could have saved more people. The city of Jacmel needs you really badly.”

The stories and images captured by the students' are heartbreaking and hard to watch: families having the bodies of their relatives being held hostage by greedy morticians, valiant doctors doing their best to treat patients without the barest of medical supplies, residents seeking equipment to gather the bodies trapped under the collapsed buildings and the overwhelming task of trying to find space in the local cemetery to bury the dead.

"Les Handicaps" by Vadim Janvier from Ciné Institute on Vimeo.

"Priere" (Prayer) by Manassena Cesar from Ciné Institute on Vimeo.

"We were a film school until yesterday. Our new mission is to do recovery stories," writes Annie Nocenti, one of Ciné Institute's instructors. "Hopefully, stories of Haitians rebuilding."