Out of Africa: Oprah's Book Club 'Say You're One of Them' Webcast - Derek E. Baird

« When it Comes to Digital Literacy, Don't Be a Billy! | Main | Junaio: Social Augmented Reality on Your iPhone »

Out of Africa: Oprah's Book Club 'Say You're One of Them' Webcast 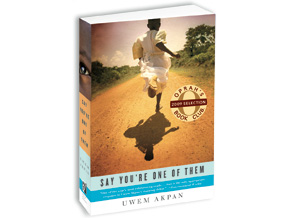 Earlier this week Oprah Winfrey partnered with Anderson Cooper and CNN for her first world-wide Book Club webcast to discuss Uwem Akpan's collection of short stories "Say You're One of Them." I can honestly say, without equivocation, that this was one of the most inspiring and uplifting presentations I've seen in a very long time.

I could go on about the brilliant technical execution of the event, the heart wrenching video vignettes produced by CNN that Ms. Winfrey used to situate and tie each of the fictional stories to real life, the Facebook integration (which produced some really insightful comments) or the quality of the discussion facilitated by Ms. Winfrey, Anderson Cooper and Uwem Akpan.

No. Beyond the technical and digital excellence, this event was an opportunity for viewers to discover that these stories of Africa are also a mirror that reflect our own stories.

One of the most poignant moments, was when Ms. Winfrey introduced Corneille Nyungura, a musician and survivor of the Rwandan genocide. Corneille shared the story of how in the middle of the night a group of soldiers broke into his house, gathered his family in the living room and started shooting.

Corneille was the sole survivor of this massacre.

I have to admit that listening to Corneille share his story brought tears to my eyes. But Corneille's story doesn't end on that horrible night. He was able to eventually leave Rwanda and rebuild his life in Canada. Truly inspiring.

Towards the end of the webcast Ms. Winfrey thanked her audience for defying the conventional wisdom of the publishing world and embracing a book filled with unfamiliar names, life experiences and stories of Africa.

In his book, The Art of Possibility, Benjamin Zander calls the invisible threads that hold us together "the WE story." As Zander explains:

"The WE story defines a human being in a specific way: It says we are central selves seeking to contribute, naturally engaged, forever in a dance with each other. It points to relationship rather than to individuals, to communication patterns, gestures, and movement...Like the particle-and-wave nature of light, the WE is both a living entity and a long line of development unfolding.

By telling the WE story, an individual becomes a conduit for this new inclusive entity, wearing its eyes and ears, feeling its heart, thinking its thoughts..."

This webcast event illustrates how harnessing digital media to tell the "we story" can be leveraged to open hearts, move people outside their comfort zones and inspire them to be active participants in social justice issues.

This is what Ms. Winfrey has done for the last 25 years--shine a light the endless number of stories that surround us and then connect the "invisible threads" that transform a story from "me" to "we."