« Hey Josh for Grown-ups: Learn How to Communicate with Teens | Main | AdMob Research: Facebook is the Leader of the Mobile Social Networking Pack »

What Japan Thinks is an excellent blog that brings translated research, opinion polls and surveys to an English-speaking audience.

It's well known that the Japanese are more likely to be early adopters of new technologies and are very much in love with all things mobile. 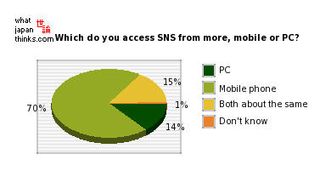 Here are some of the key findings: