"The essential difference between emotion and reason is that emotion leads to action while reason leads to conclusions." - Donald Calne

Last week, for those of us who work in the youth digital media space, a big chunk of everyone's attention was focused on the 'Youth Media Consumption' memo written by an intern at Morgan Stanley.

While many folks were debating its merits and findings, a much less publicized event took place that asked teens not "how" they use the web, but instead focused on the emotion behind "why" they use the web.

The Web Makes Me Feel (TWMMF) is a project headed up by MediaSnackers, a leading UK youth media consultancy, that explored the emotional responses to the social web among 13-19 year olds living in the UK.

Why focus on emotion?

Emotion is a very persuasive hook that, sometimes even more than logic and reason, influences the choices we make, what we buy, or where we go on the web.

Emotion can also drive user adoption and/or motivate people to use (or not) certain types of technology (think iPhone or Kindle) or social networking sites (think Twitter and Facebook!) and in an e-learning environment, emotional resonance is the glue that holds students' attention and fosters student retention.

As part of the TWMMF project, the MediaSnackers team distributed 500 postcards to 13-19 year olds and asked them to describe in one word how the web makes them feel. Respondent's were then given one additional line to explain the reasoning behind their choice. In all, MediaSnackers collected over 143 different emotions. 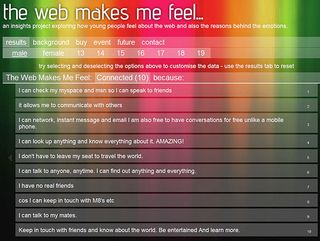 The TWMMF website contains an aggregation of all the emotions collected (over 431 cards) and, here's the really slick part, allows users to explore all the responses and dig deeper by drilling down to look at the results for each word by age and/or gender.

Some of the key findings:

The TWMMF project and website were rolled out on July 15th at an event held at NESTA and attended by both participants, researchers and other members of the social media community.

At the launch event, the MediaSnackers team asked several of the attendee's 'How Does the Web Make You Feel and Why?' The responses from the video interviews mostly seemed to dovetail with the results of the postcards.

One response, in particular, caught my attention.

Ahhh, there it is--the perfect summation of what this project is all about! He felt conflicted because he had made the same emotional connections in his online relationships as he had in his offline life.

Beyond metrics, demographic research, user-experience design, usability studies and other measurable (rational) aspects--in many cases what actually drives our use of the web is emotional resonance.

Many times parents, educators, media and government types draw conclusions about Millennials, social networking and their 'always-on' lifestyles using a methodology based on rational facts and data crunching, failing to give the social and emotional dynamics of teens and technology any consideration.

This project also confirms what the Millennials having been trying to say about the social web all along: it's not about technology, it's about relationships.

Perhaps it's time we started listening.