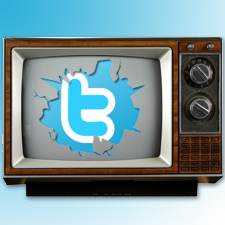 The folks over at the uber popular microblogging (or social messaging) service Twitter have announced plans to launch a TV series. According to reports, the Twitter television series will feature content "from the site's 140-character "tweets" and would feature ordinary people competing as they follow celebrities on Twitter."

This news isn't that much of a surprise to long time followers of Twitter co-founder Biz Stone's blog. Biz has many ties to the entertainment industry and so this new venture seems like a natural extension of his interests and sdfsddsfd.

Several television shows have already integrated Twitter into their shows as a way to get real time feedback and interaction with viewers. Most notably, Rick Sanchez was one of the first to use Twitter, along with Facebook and MySpace, as a way to connect with viewers in real time during his hourly news program on CNN.

But all is not well in Twitterland. Twitter King Ashton Kutcher has come out against the move saying that the proposed format would lead to the "stalking" of celebrities. Kutcher further stated that if Twitter moves forward with the proposed TV format he and his wife Demi Moore would boycott the site.

Recent research has found that more and more viewers are surfing the web or interacting with friends on social sites while watching television. This simultaneous multiplatform consumption of media--from the tv, web or even mobile web--is rapidly becoming mainstream and Twitter seems poised to ride this trend and possiblily (finally?) make some cash along the way. Will people want their Tweet TV?

Only time and Tweets will tell.