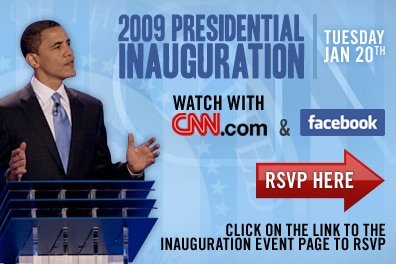 CNN.com and the popular social networking site Facebook have teamed up to provide an interactive and web-based experience aimed at high school and college students.

According to The Hollywood Reporter:

"Facebook members will be able to click onto a special CNN.com Live page to see the inauguration and other activities. Integration between Facebook and CNN.com will allow them to stay on the page and still be linked to Facebook."

As part of the CNN.com and Facebook effort users will be able to update their FB status, and follow their friends' updates, while they watch the inauguration live online or on television.

Meanwhile, Disney has also announced that it will go to Washington D.C. for the Obama Presidential Inauguration, where it will cover a range of special events across its television channels and various digital platforms, including events specifically aimed at kids and families.

The Disney Channel will televise the Kids' Inaugural: We Are The Future, honoring military families, on Monday, January 19th.  Attended by Michelle Obama, Dr. Jill Biden and their families, the concert will be broadcast on Radio Disney, and will be streamed on Disney.com immediately following its completion.

Not to be left out, MTV will also broadcast from Washington D.C, New Orleans and Kenya, on behalf of MTV Africa, with coverage airing across the MTV networks (MTV, MTV 2, MTV Tres, MTVU and MTV.com).

It looks like the mainstream media is taking a page out of the Obama youth playbook and learning how to actively engage Gen Y media sensibilities and eyeballs through multiple screens.